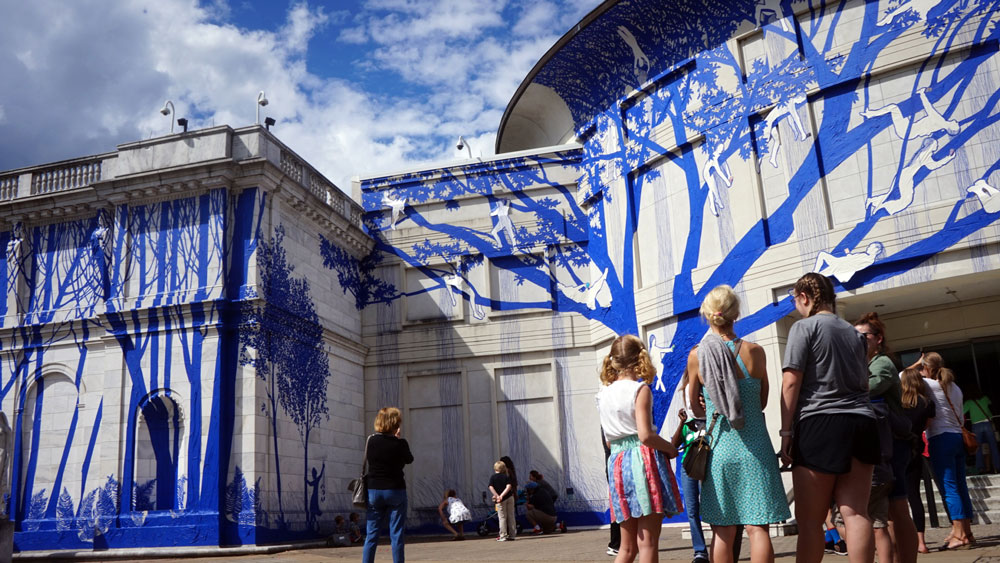 A massive 20-day mural made for the Brooks Art Museum, Memphis, TN.

Art lovers from Memphis and the Mid-South experienced more Tape Art installations thanks to generous donors to Memphis Brooks Museum of Art.

A popular auction item during May’s record-breaking Grand Weekend was the chance to collaborate with Tape Art founder Michael Townsend and creative director Leah Smith on a mural at a site of the buyer’s choosing.

This summer the auction buyers worked with Townsend and Smith to come up with subjects for murals that lived in the chosen spaces for one week. After that, the mural will be removed, formed into a ball, and placed on view at the Brooks, along with photographs of the mural and the names of their donors.

The following is the list of locations where the Tape Art Crew worked:

Public Mural at The Orpheum Theatre

Sponsored by Joanna and Josh Lipman.

Sponsored by Sarah and David Thompson.

Sponsored by Mary and Bob Loeb.

The Rhode Island-based artist collective Tape Art, known for creating over 500 temporary murals installed around the world, including reactions to the 1995 Oklahoma City bombing, the September 11, 2001 attacks in New York City and the 2013 earthquake in Fukushima, Japan, capped the museum’s centennial celebration with a gigantic installation on the Brooks’ façade.

The latest in our Brooks Outside exhibition series, Tape Art invigorated museum grounds and activated the community during its three-week run.

The process began in August 2016, when Tape Art founder Michael Townsend and creative director Leah Smith traveled to Memphis for a site visit and created a concept that celebrates the images of women in the Brooks’ collection.

“We are making a really lovely artwork that tells a compelling story and includes as characters women players, culled from the museum’s permanent collection,” says Townsend.

Possible contenders include such popular figures as George Romney’s 18th century  Portrait of Lady Wright, Marisol’s pop art Virgin Mary (from The Family), Red Grooms’ Memphis Minnie (from 2016’s Memphis on My Mind), Medusa (from Luca Giordano’s baroque-era Slaying of Medusa), the young girl depicted in William-Adolphe Bouguereau’s French salon painting At the Foot of the Cliff and more. These concepts will be incorporated into a massive work that is visually inspired by Girl Tree, a painting by Memphis’ own Carroll Cloar.

Using ladders, a boom lift, and a bountiful amount of low-adhesive paper tape, Townsend, Smith and the Tape Art Crew began the mural-making process outside the Brooks Museum on Monday, May 8.

The public was invited to drop by to observe the progress of the work, to participate and to interact with the artists.

Like Tape Art installations at the New York Aquarium, the Worcester Art Museum and Grand Rapids’ ArtPrize, the Memphis artwork was intentionally temporary. Regardless of the time spent to create the mural, the installation ended with an invitation to the public to join in the removal process on Wednesday, May 24. More than 400 people attended the Tape Art Finale: Party on the Plaza  and enjoyed music, art-making, food trucks and more.

Join us in removing the mural created by the Rhode Island-based artist collective Tape Art. Using ladders, a boom lift and a bountiful amount of low-adhesive paper tape, Tape Art founder Michael Townsend, creative director Leah Smith and the Tape Art Crew will begin the mural-making process on the Brooks Museum's façade on Monday, May 8. The public is invited to drop by to observe the progress of the work, to participate and to interact with the artists. The artwork created in our third project of the Brooks Outside series is intentionally temporary.

Art in the Boardroom | TEDxProvidence

What happens when the Brooks Museum moves its art outside?