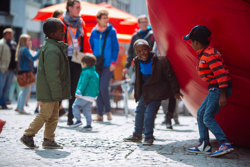 “On behalf of the Brooks, I’m proud to announce RedBall Project as our gift, on our hundredth birthday, to the city of Memphis,” said Emily Ballew Neff, Ph.D., executive director of the Brooks Museum.

As part of the museum’s centennial, New York artist Kurt Perschke will bring his world-traveled RedBall Project to Memphis April 28 – May 7. During its performance run in Memphis this fun and provocative installation will be strategically placed in ten different sites in the city, personally selected by Perschke during his visit to Memphis in December 2015.  #redballproject

Perschke uses RedBall Project to encourage exploring each city’s unique architectural landscape and history. By squeezing the installation between buildings and hoisting it over pedestrians’ heads the ball punctuates overlooked spaces.

“On the surface, the experience seems to be about the ball itself as an object,” said Perschke, “but the true power of the project is what it can create for those who can experience it. It opens a doorway to imagine ‘what if?'"

Use #myrbmemphis on your RedBall photos for cool prizes like: Official RedBall Prints and Brooks Museum Memberships.

Grand Prize includes Annual VIP Film Passes and a print signed by the artist from all available Official RedBall Prints. Winners announced throughout the performance on Friday, April 29; Wednesday, May 4; Friday, May 6; Monday, May 9; and the Grand Prize Winner on Tuesday, May 10. Follow @redballproject and @brooksmuseum on Instagram and see the contest's full details on the contest page starting April 28.

RedBall Project is the inaugural exhibition for Brooks Outside, a new program for the Brooks, which will enliven and invigorate Brooks Museum grounds, Overton Park, or sites around the community. Each has been chosen to offer meaningful experiences, to extend community goodwill, and to generate discussions about art in general.